What Are PEG Linkers and Their Applications?

Learn more detailes about PEG linkers and its applications in pharmaceutical field.

Polyethylene Glycol (PEG) is a general term for ethylene glycol polymers with relative molecular weights of 200-8000 and above, which have different physicochemical properties depending on their molecular weights and structures. It has excellent lubricant, moisturizing, dispersing and adhesive properties, and can be used as antistatic agent and softener, etc. It is widely used in cosmetics, pharmaceutical, chemical fiber, rubber, plastic, paper, paint, electroplating, pesticide, metal processing and food processing industries.

Through a chemical synthesis reaction, PEG linkers can be made by precisely introducing functionalized groups with strong reactivity at specific molecular ends of PEG.  Since a variety of groups can be introduced, PEG linkers are widely used in biological and medical research due to their solubility in water, excellent biocompatibility, and non-immunogenicity.

Long-acting drug is a traditional application of PEGylation, which has been clinically applied for more than 30 years and gradually become the mainstream solution for long-acting drug. As the research of PEGylation progresses, its application fields are widening, besides peptide and protein drugs, it is also applied to small molecule drugs, ADC drug linker, gene drug (siRNA, mRNA) delivery and hydrogel-based devices, etc.

In the 1970s, Professor Frank Davis of Rutgers University modified bovine serum albumin with PEG in order to reduce the immunogenicity of recombinant proteins, prolong their metabolism in vivo and enhance protein activity. Since then, this technology has been widely used in many fields of biomedicine. In 1981, Professor Davis founded Enzon Pharmaceuticals, and in 1990, the FDA approved Adagen® (pegademase bovine) , the world's first PEGylated drug for severe combined immunodeficiency disease. Since then, PEGylated ADA, IFN, CPT, rhG-CSF, L-asparagi-nase, and many other products have been introduced. To date, there are more than 30 FDA or EU-approved PEGylated drugs on the market worldwide, with a market size of more than $10 billion. Below, the tabel shows the FDA approved PEGylated drugs up to 2022.

From the marketed products and pipeline products under development, the current research and development direction is mainly PEGylation of protein and peptide drugs.

The principle of long-acting PEGylated protein and peptide drugs is to reduce renal clearance and reduce the rate of  enzymatic degradation. Protein and peptide drugs are composed of amino acids, which are often rapidly excreted through the kidneys or inactivated by proteolytic enzymes after their action in the body. As a result, their efficacy is short and can cause large changes in the blood concentration of drugs within a short period of time. In addition, these drugs may be recognized by the body's immune system as foreign substances in vitro, causing further adverse reactions.

Linking with specific PEG derivatives can increase the relative molecular weight of drugs, making them less likely to be degraded and filtered out of the body by the kidneys, and prolonging the duration of effective drug concentration maintained in the body. In addition, the long-chain PEG derivatives can wrap the drug to avoid rapid enzymatic degradation or recognition by the immune system, so that the drug can be released slowly in the body, stabilizing the blood concentration and reducing the frequency of drug administration. 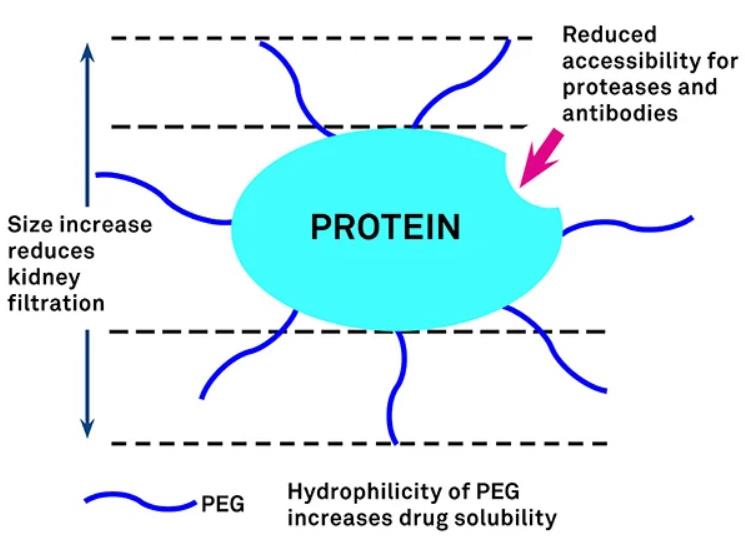 PEGylation can address certain deficiencies in the physicochemical properties and pharmacokinetics of small molecule drugs.

First, the problem of water solubility of drugs can be solved. Many small molecules with drug activity are often insoluble in water and have high toxic side effects, making them difficult to be injected into human body. Since PEG derivatives have good water solubility, the drugs formed by coupling PEG with small molecules can also be dissolved in water quickly, so that they can be used as injections and absorbed by the human body.

Secondly, the half-life of the drug can be increased. Due to the increased relative molecular weight of PEGylated small molecule drug, it can avoid being rapidly filtered out of the body by the kidneys. As a result, the effective drug concentration can be maintained in the human body for a longer period of time with a single injection, increasing the half-life of the drug and reducing the frequency of drug administration for patients.

In 2014, AstraZeneca received FDA approval for its PEGylated derivative of naloxone (Movantik), making it the world's first approved PEGylated small molecule drug for use in adult patients with chronic non-cancer pain and opioid-induced constipation.

Movantik, shown above, is a pegylated derivative of α-naloxol.

➢ LNP (Lipid Nanoparticle) is the most mainstream non-viral vector for the delivery of mRNA to target cells. It is composed of ionizable lipids that are positively charged at low pH and neutralize the negative charge of mRNA. In addition, LNP includes neutral lipids and cholesterol, which self-assemble into a core lipid structure with a surface layer that mimics the cell membrane. The LNP binds phospholipids conjugated to PEG to increase the hydrophilicity of the LNP surface and provide stability to the mRNA carrier.

The principle of RNA delivery by LNPs is currently not completely clarified. However, it is generally believed that the lipophilicity of LNPs allows the particles to bind to the cell membrane of the body and be taken up by endocytosis. Upon entry into the cell, the mRNA escapes from the initially encapsulated vesicles and is released into the cytoplasm to express the target protein. LNPs can also be expelled from the cell through reverse exocytosis, which is of particular concern for mRNA delivery via LNPs. The target organ of the mRNA-LNPs complex is the liver. After entering the body, the agent binds to apolipoprotein E, and is then taken up by liver cells through receptor-mediated endocytosis, where it acts.

On the other hand, LNPs not only deliver mRNA to human cells, but also act as immune adjuvants to enhance the immune response. These microscopic oil-like droplets, approximately 0.1 μm in diameter, surround and protect the fragile mRNA during vaccine production, transport and final injection into the body. According to the public data, PEG has never been used in any other vaccine worldwide before, and the use of PEG in mRNA vaccines last year was a new application of PEG in the pharmaceutical field.

Huateng Pharma is a dynamic science company dedicated to PEG derivatives. We can supply the PEG products used in COVID-19 mRNA vaccines, such as mPEG-N,N-Ditetradecylacetamide, ALC-0159, mPEG2000-DMG, mPEG2000-DSPE, etc.

ADC (antibody-drug conjugate) drugs are composed of monoclonal antibodies, linkers and active drugs. A suitable linker helps maintain the stability between the antibody and the drug and helps the antibody to selectively deliver the drug to tumor cells and accurately release the drug. PEG is one of the most widely used linkers in targeted therapy. PEG linker has the characteristics of high utilization rate, high targeting ability, and pH regulating properties, etc. Through the selection of multiple functional groups, PEG linkers can be combined with different antibodies and drugs to form different linkers, such as pH-sensitive linkers, disulfide bond linkers, β-glucuronide linkers, etc. PEG binds to a drug target through a chemical linker to achieve specific site-specific linkage, degradation and sustained release.

Two of the latest ADCs to be approved, Trodelvy and Zynlonta, were developed with PEG moiety as part of their linker technology to improve solubility and stability in vivo.

Multi-arm PEG derivatives is widely used as a medical device material for wound adhesion, hemostasis, anti-leakage and anti-adhesion in various human surgical procedures for its soluble, biocompatible, non-toxic and low immunogenic properties. At the same time, PEG can also be used as a raw material for implanted human medical devices, replacing the existing widely used plant-derived, animal-derived and human-derived materials. PEG is expected to become a new generation material in biodegradable medical devices after chitosan and sodium hyaluronate.

Tissue isolation for radiation therapy is a cutting-edge application area for PEG hydrogel products. When treating cancer patients with radiation therapy, the goal is to destroy cancer cells while avoiding damage to surrounding healthy tissue. Tissue isolation is achieved by injecting PEG hydrogels between tissues, which effectively reduces the radiation dose reaching other healthy tissues.

Huateng Pharma, a worldwide leader of PEG linkers,  offers a wide array of  5,000 PEG derivatives, covering monodispersed and polydispersed structures with molecular weights ranging from 200 to 4w. These compounds feature great aqueous solubility, smart choice of PEG length, and a broad selection of functional groups to choose from. Contast us at sales@huatengusa.com for more details. 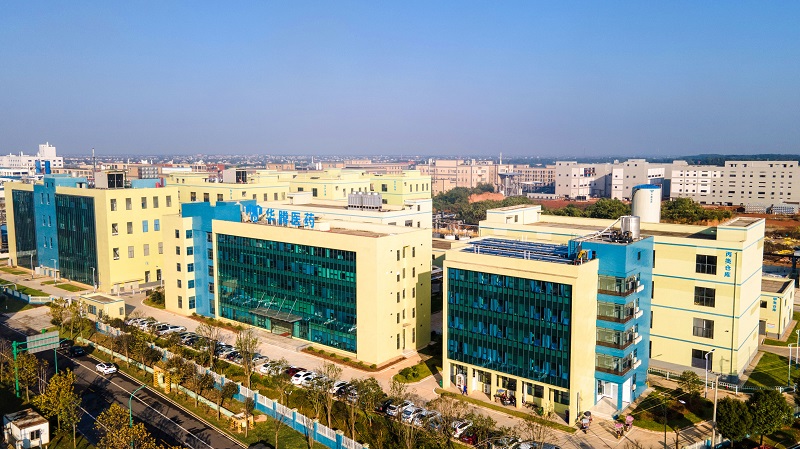